I am 17 weeks pregnant with this little nugget, and it is really starting to fly by! I can not believe I am already almost halfway through this surrogacy. You wait and wait as a surrogate for things to progress from match meeting to medical workup to legal to transfer and then you’re pregnant and boom, it’s over. I mean, halfway over, but this is when it really starts to get fun!

We got genetic results from my 12 week appointment back and everything looked great and well within normal ranges. I thought my IM had been waiting for me to hit second trimester and to get those results back to tell her family and I was so excited for her to do so, but she threw me a curve ball. She had spoken to my OB and a specialist and had decided to pursue Amniocentesis. Honetsly, I wasn’t REALLY surprised. I was hopeful that she wouldn’t want to do it, but I think I knew, in the back of my mind, that it was a real possibility. My IM is “of advanced maternal age” which is a ridiculous saying because she’s only 43 which is not any kind of advanced age …at all…, but in terms of having babies, there are much higher risks for genetic birth defects as we women age.

I can’t even begin to imagine how difficult it must be for IPs to go through so much to get pregnant and then still have to stress about the “what ifs.” I never had to really worry much about even the possibility of birth defects as there is nothing in my family history and I had my girls in my early twenties. I did get a little emotional when I found out she wanted to do Amnio because that made me think about all the possibilities and what would happen if something does come back abnormal, but I caught my breath and put myself in her shoes. She’s a first time mom, she has everyone from fertility clinics to nurses to doctors reminding her of increased risks as a mom of her age, she’s out of state and out of control for most of this process. I can’t blame her for wanting to do everything in her power to prepare for anything and everything. I wasn’t excited about it, but I was absolutely on board and supportive. I reminded her that I am just a temporary shelter for this baby. This is her baby and her decision. I will support her always. That’s what I’m here for!

My IM also informed me that she was going to Africa and wouldn’t return until mid February, which meant she’ll be out of town for the Amnio. She made sure I had ALL her contact info and every possible way to get ahold of her should I need anything before she returned. I know it’s hard for her to be away for such an important appointment, but I think she’s going to have the time of her life.

I had my 16 week appointment with my OB on Tuesday January 31. It was the fastest and easiest appointment yet. I peed in a cup, the doctor did a doppler of the baby’s heartbeat (high 140s), I had no questions and she said see you at 20 weeks. It took all of five minutes.

Wednesday was my Amniocentesis. I had worked the night before so I only had three hours of sleep before my appointment and since I didn’t know how I would react to it all, my husby took the day off work to come to the appointment and take care of me for the afternoon. I felt pretty prepared, mentally, as my case manager had talked to me about it a bunch and had put me in touch with another surrogate who had done an Amnio.

Let me tell you, I was stressed about nothing. My IM and I were in contact via text before, during, and after my appointment. We had a wonderful ultrasound tech do a very long and thorough ultrasound taking all sorts of measurements and chatting about the surrogacy. She had spoken to my IM on the phone and was curious about the process. We were very 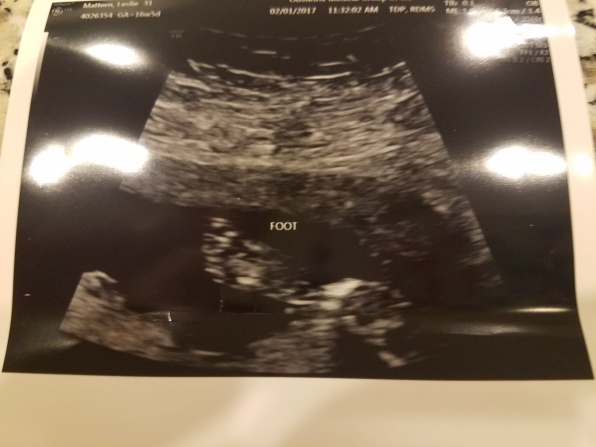 adamant that we did NOT want to know gender as my IM has decided not to find out and there is no way I can keep that kind of secret. I would crack under the pressure in one text message. She was kind enough to warn us when she got to the gender part of the ultrasound so we could look away and boy was that difficult!

Next, the doctor came in and introduced himself. He double checked that we for sure wanted to do the Amnio, and we said yes. He repeated a lot of the ultrasound but took the time to explain everything he was checking and he was kind enough to let us record the entire thing so we could upload it for my IM. I knew she would have questions that I would have forgotten the answers to so it was much easier to record it so she could hear it straight from the doctor. He said everything looked great on the ultrasound, we even got to see the four separate chambers of baby’s heart, and he explained I will have to go back for a f0llow-up appointment for them to check the baby’s heart more thoroughly as it is too small right now for them to have definitive information. It is totally normal for the age of the baby, but to make sure the heart is perfect I will go back at around 22 weeks. He was also kind enough to let us know to look away when he was looking at baby’s gender, although it was just as difficult not to look the second time.

The Amnio itself was super fast! The doctor explained everything prior to beginning and told me it would all take less than a minute, they would have the ultrasound on the entire time to ensure they were no where near the baby, and that there are some slight added risks associated with Amnio. There is a 1% higher chance of miscarriage, there is also a risk of amniotic fluid leaking, bleeding, and cramping. When he was sure we knew what we were in for and still on board he began the procedure.

He first rubbed iodine all over my belly to clean it, put the ultrasound on my tummy to find a good spot, jabbed in the needle, which I didn’t feel at all, then jabbed a second time to get through the uterus, felt it that time as my uterus contracted and I had a cramp the entire time the needle was in my uterus, he then attached a syringe to draw out the amniotic fluid. When he was done he pulled the needle out and the tech helped clean off the iodine and that was it.

Seriously, it took less than a minute. I wish I could tell you the needle was or wasn’t scary, but I didn’t look at it just to make sure I didn’t freak myself out and my husband did not get a good picture. (He’s fired as a photographer.) The end product was two little vials of amniotic fluid, which totally looks like urine, but it kind of is.

I had instructions to rest the remainder of the day, no lifting, no exercise, no sex, no strenuous activity of any kind, but could resume normal life the following day as long as I felt ok. He said we’d have results in about two weeks and he’d make sure to notify my IM whatever way he could.

The remainder of the day I slept. I was exhausted from only having had three hours of sleep and working nights in general so I slept away the afternoon snuggling my husby on the couch. It was wonderful. He is a pretty amazing caretaker (terrible photographer), just saying. I literally laid on the couch the rest of the day just watching tv and playing video games.

Now, I feel great. I haven’t had any side effects from the Amnio whatsoever and I’m confident the results will be fine. I have even started feeling the occasional kick from this little baby! This is my favorite part of pregnancy. I’m starting to get a bigger belly so it’s becoming more and more obvious that I’m pregnant and I’m starting to feel movement which is the absolute best part of pregnancy. I am so excited for my IM to become a mom and can’t wait for her to meet her little baby, especially because I’m excited to find out the gender, but I’m going to try to really enjoy the second half of my pregnancy because it’s such an incredible experience.

Now we wait for the Amnio results, 20 week appointment and hospital tour. My IM is going to fly in for those appointments so she will get to be present for an ultrasound and experience it in real life and not via Skype, and hopefully the baby will be nice and active so she can even feel a kick or two!